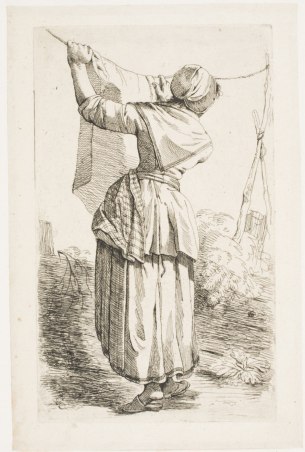 Washington allowed women to assist the army in several occupations including nursing and washing, to earn their rations or a small sum of pay. One of the most vital roles that women played in an encampment setting was that of nursing the sick. It is estimated that at the Valley Forge encampment 2,000 men fell victim to diseases such as typhus, typhoid influenza, and dysentery.[1] The Continental Congress had allowed women to receive payment as nurses as early as July of 1775.[2] One of the nurses present in the Valley Forge encampment was named Jane Norton. Norton is listed on Valley Forge’s muster rolls as a camp follower.[3] Mayer states that Norton was married to Drum Major William Norton and attempted to file for her pension, having cared for the ill and wounded men of the Continental Army. It is unknown whether Norton’s pension was granted. Nurses primarily assisted with cleaning hospitals and performing basic caretaking such as feeding the soldiers. They did not provide medical treatments in most cases unless there was a dire absence of other staff.[4]

Indeed, the primary function of gainfully employed camp followers was in performing tasks related to keeping the camps clean and orderly. Most accounts indicate that a considerable number of women were employed by the army as laundresses. Washington maintained a retinue of servants and staff he referred to as his “military family.” One of the members of his “family” was Margaret Thomas, a wash woman. She was recorded as having been “paid for washing done for his Excellency Gen. George Washington October 20, 1776 to February 20, 1778 including servants £28..17..6.”[5] This was relatively lucrative full-time employment for Thomas. Another woman who served in Washington’s “military family,” was Mrs. Elizabeth Thompson,  a housekeeper employed from 1776-1781, who purchased goods for the family, managed the rest of the household staff including cooks and wash women, and maintained the supply of dishware and linens. [6]

Cleanliness was a regulated practice in the Continental Army. Women associated with the 2nd Pennsylvania Regiment, under the command of Colonel William Stewart, faced an intense penalty for overcharging soldiers for laundry done by the piece of being first told to leave the regiment and then “drummed out of camp” if they stayed there.[7]

Paul Sandby, “A Prostitute Drummed Out of [British] Camp in Hyde Park, 1780.” Courtesy of Najecki Reproductions

While cooking was not a primary responsibility for camp followers as most messes of soldiers did their own cooking [8], some camp followers like free black woman Hannah Till served as cooks.

Whether camp followers were performing the duty of hospital nurses, laundresses, or cooks, they were ultimately supporting the army and giving their livelihoods in exchange for rations and care for their children.[9] It was not patriotism or duty that called them so much as survival. Their permission to live in camp was not guaranteed, as demonstrated by Stewart’s regulations about laundresses. It was harsh for camp followers to perform labor for the army, but they served nonetheless.

[2] “Highlights in the History of the Army Nurse Corps,” US Army Center of Military History, http://www.history.army.mil/html/books/085/85-1/CMH_Pub_85-1.pdf, 11. Discusses Second Continental Congress’s decision to pay women as nurses.

One thought on “Camp Followers’ Occupations”